Conker: Live and Reloaded brings back Conker, the squirrel with a bad attitude, for a new round of crazy gaming — this time with multiplayer options, so your friends can get in on the action. You’ll lead an elite squadron to war as the Squirrels battle the invading Tediz. Players can compete as one of six combat specialists across multi-mission campaigns covering Old War and Future War, with all the non-stop action, humor, and innuendos Conker is famous for. Devastating weapons include camera-guided rockets, an acid thrower, and loads of grenade type — Operate five types of vehicles including Sky Steed, Mule Bomber, R-Hog, Toad, and Tankus Also includes the critically acclaimed Conker’s Bad Fur Day, completely recreated for the Xbox — with all the hilarious situations, movie pastiches, off-the-wall puzzles, and crazy characters, from horny bees and voluptuous sun flowers, to singing piles of poo. 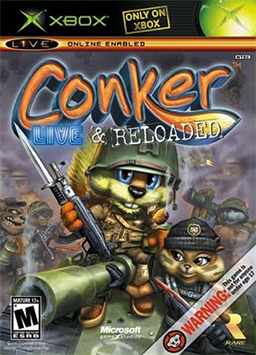 < Back
Starfox Adventures
Next >
Kameo: Elements of Power